Police have seized more than 43 tons of marijuana and destroyed over 130,000 plants after taking control of the outlaw village of Lazarat, known as Albania’s cannabis capital.

The Albanian authorities are now in control of Lazarat after a week of battles with heavily-armed marijuana traffickers, and hundreds of police officers are securing the village, sweeping buildings for drugs, weapons and ammunition.

The village had been off-limits to local police for more than a decade, becoming a synonymous with uncontrolled crime.

More than 1,000 police officers took part in the operation that was launched a week ago, including special forces units with armoured vehicles and helicopters.

One police officer and two shepherds were wounded and 21 suspects including an alleged drug baron, accused of shooting at police, have been arrested.

Police have destroyed five drug labs and have and have sequestered large quantities of weapons, including grenade launchers, an anti-aircraft gun, a heavy machine guns, explosives, grenades and hundreds of AK-47 automatic rifles.

A total of 133,219 marijuana plants have been destroyed.

Italian financial police say the remote village in the south of the country produced 900 metric tons of marijuana last year, with an estimated street value of 4.5 billion euro./balkaninsight/ 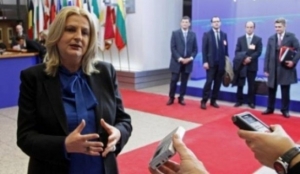