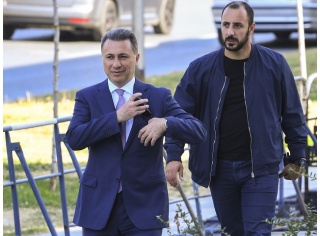 SKOPJE – Macedonia’s former Prime Minister Nikola Gruevski has been told to report to prison on November 8 the latest, to serve his two-year jail sentence for the illicit purchase of a luxury Mercedes.

TThe Criminal Court in Skopje confirmed on Friday that it has handed a ‘referral act’ to ex-premier Nikola Gruevski, saying he should start serving his jail sentence at the prison in Shuto Orizari, near Skopje, on November 8 at the latest.

The court in a press release said that a courier today handed the act to Gruevski in person, while he was in front of the court for another trial, “after a previous unsuccessful attempt to deliver it at a home address”.

On October 5, the Appeals Court confirmed Gruevski’s two-year jail sentence in the case codenamed ‘Tank’, in which he was found guilty of illegally soliciting the secret purchase of a 580,000-euro Mercedes in 2012 from former Interior Minister Gordana Jankuloska, which he planned to use for his own purposes.

The Criminal Court initially convicted Gruevski in its first-instance verdict in May.

In the same case, the Appeals Court reduced the sentence of another defendant, former assistant interior minister Gjoko Popovski, from six-and-a-half to four-and-a-half years in jail.

Jankuloska was sentenced to six years in jail earlier this month in a trial conducted separately because of her pregnancy. She has the right to appeal the first-instance verdict.

Gruevski has insisted that this and other ongoing court cases against him were a political set-up fixed by the new government led by the Social Democrats, SDSM.

He served as prime minister from 2006 to 2016. His right-wing VMRO DPMNE party was ousted in 2017 after a prolonged political crisis in which he and his close associates were accused of imposing authoritarian rule and involvement in corruption./BalkanInsight/