Putin vows to act against US missile shield threat

Russian President Vladimir Putin has vowed to neutralise “emerging threats” to Russia by adjusting the country’s budget to counter US activation of missile defence shield. With this development, both the countries entered into arms race that will destablise the region.

At a Soviet-era base in Romania, on Thursday, the US turned on the $800 million missile shield against missiles from Iran and so-called rogue states.

However, the Russian president, while speaking to top defence and military industry officials said that the objective of the US defence missile system was to undermine Russia’s nuclear arsenal.

Putin said: “This is not a defense system. This is part of US nuclear strategic potential brought onto a periphery. In this case, Eastern Europe is such periphery.”

He also stated that Russia would not like to be pushed into this race but vowed to keep re-arming its army and navy. He went on to say that Russia would spend the approved funds in a way to ensure maintenance of “the current strategic balance of forces.”

“Until now, those taking such decisions have lived in calm, fairly well-off and in safety. Now, as these elements of ballistic missile defense are deployed, we are forced to think how to neutralize emerging threats to the Russian Federation,” the Russian president asserted.

The Russian president advised against taking a nuclear threat from Iran seriously and alleged that the US was only using it as a pretext to build its missile defence in Europe.

On Thursday, however, the US Deputy Defense Secretary Robert Work said the US has no intention to use the system against any future Russian missile threat.

Upon completion in 2018, the full missile shield system in Poland will stretch from Greenland to the Azores.

The missile shield uses radars to detect a ballistic missile launch into space. The installed sensors then measure the rocket’s trajectory and destroy it in space before it re-enters the Earth’s atmosphere. The interceptors can either be launched from ships or ground sites. 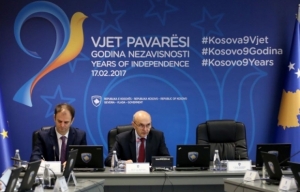