The Old Bridge is located in the old city core. As the river divides the town into two old parts, the Stone Bridge played (and plays) an important role in the development of trade and life in general, on the both sides of Lumëbardhi river.

For the construction of the bridge there is not any evidence yet, but based on its typology it could be stated that it should have been built by the end of the 15th century. The Old Bridge consists of three arches, where the middle arch is the largest, whereas the side arches are smaller and are not the same that makes the bridge asymmetric.

During the adjustment of the “Remzi Ademi” road in the 1950’s, the bridge changes in its appearance as the right- arch (north side) gets closed to expand the road.
Although with a deformable view, the bridge has committed itself until 17.11.1979 where waters flood the city of Prizren, where the bridge falls apart completely.

Since the bridge had a special significance for Prizren and residents were emotionally related with it, they decided to make a reconstruction. So they started with the analysis and drafting of projects documentation. The Bridge rebuilt again where the cornerstone was laid on the 5th of June 1982, while the inauguration was done on the 17th of November 1982. Besides the bridge there was built place called “keji’’ on the right side of the river. 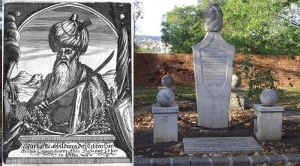